Let's travel back to 1910 when famed botanist and ecologist E. Lucy Braun was roaming and traversing the forested hills of Hamilton county, Ohio, collecting and observing the native flora to gain a better understanding of the fascinating and seemingly endless diversity and ecosystems of the extreme southwestern corner of our great state.  Lucy was well before her time and one of the most accomplished and talented botanists Ohio ever produced; let alone the fact she was a woman in a largely male-dominated field.  Her findings, knowledge and publications are still widely used and appreciated today by anyone with an interest in the botanical world.

On one particular day in May of that same year she came across an intriguing and very rare species of plant with clusters of pale-pink flowers and three-parted leaves that she collected and sent to the herbarium at the University of Cincinnati.  There the voucher sat for decades on end as the only proof that buffalo clover (Triflolium reflexum) ever existed in Hamilton county and it slipped into legend and mystery.


Fast forward a little over a century later and another great native of the area and incredible botanical mind would erase that mystery and legend.  On an early May afternoon while wandering around the same area as Lucy over 100 years earlier the sharp, eagle-eyes of Dan Boone spotted something unique growing in small groupings under a mixed oak canopy that made his heart skip a beat.  If there was anyone in Ohio worthy and deserving enough to find something of this botanical magnitude it's Dan.  You don't get a nickname like 'the clover kid' for nothing!  Our native clovers (Trifolium spp.) have long been one of Dan's greatest and deepest passions and finding this great rarity in his home county just mere miles from his house was more than a dream come true.  I can still hear the excitement in his voice as I got the call sharing the news and an invitation to come down and photograph the gorgeous specimens.


While Lucy described her plants as having pale pink flowers, these plants exhibited more of a cream color with perhaps the slightest tinge of pink on newly-opened corollas.  Not to be confused with Ohio's other native species of clover, the Running Buffalo Clover (T. stoloniferum); this species lacks the running stolons.  The length of the calyx teeth can also be used to distinguish the buffalo clover from other non-native and introduced Trifoliums but once you see these remarkable plants in person it's hard to mistake them for anything else.  The flower heads are significantly larger than the European white clover (T. repens) as are the running buffalo clover's as well.


Buffalo clover has the interesting trait of being an incredibly variable species from population to population.  In fact, Dan has seen a number of populations throughout the Midwest and no two have ever been the 'same' in appearance.  Sometimes the leaves will exhibit chevrons, or watermarks, on the leaves while others (such as these in Hamilton Co.) will lack them completely.  The color of the inflorescence can greatly differ as well, from scarlet red to creamy white to pink and light yellow. 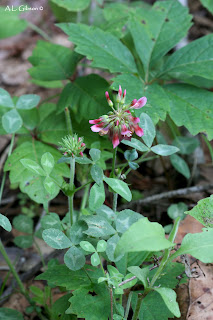 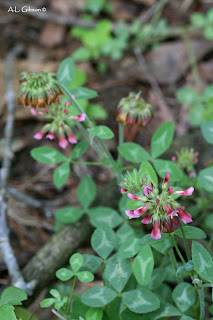 The two photographs above are both buffalo clover from a recently re-discovered population in Mammoth Cave National Park Dan and I saw last early June down in Kentucky.  Notice how the blooms are deep red and the smaller leaves show off the chevrons that the Hamilton county population lacks.  Some suggest there are a great number of varieties within the species but that has yet to be confirmed or denied through genetic work.


I was fortunate to catch the plants in peak bloom a couple weeks ago as I made the journey from Athens to Cincinnati to photograph and document this remarkable find of Dan's.  I've seen many rare and incredible species of plants in my countless wanderings and botanical forays with Dan but few could ever match the emotion and excitement of seeing this historic species on Ohio soil.  Some may shrug their shoulders and say "so what, I see 'white' clover in my yard every day", but how wrong they are to even suggest this plant is in the same category as the exotic species of Europe and Northern Africa.  This truly is one of Ohio's most rare and imperiled of plants.


Originally found and documented in about a dozen scattered Ohio counties, it's numbers and populations have dwindled in the last century.  East of the Mississippi River the buffalo clover becomes increasingly rarer with scattered and isolated populations throughout the Midwest and southeastern states.  As you can see from the distribution map above, the only area of the country where it is rather common is in Missouri and Arkansas, where it is a frequent species of the Ozarks.

For the past few decades the only population still extant in the state lied in Pike county where the plants bloomed scarlet red and exhibited faint chevrons on the leaves; much like the previously pictured buffalo clover from Mammoth Cave.  Thanks to Dan's constant vigilance and efforts Ohio can now proudly claim back another population to its records.  The fight is far from over though, as this species is an annual and relies heavily on seed production and disturbance to fight back encroaching vegetation and over-shading.  I'm curious what effects an under story burn would produce at the new Hamilton county site as this species has historically responded very well to burns.  In fact, the plants at Mammoth Cave had sat dormant for nearly two decades in the seed bank of a rocky, dry mixed oak forest before a prescribed burn a couple spring ago sprang them forth.


Upon closer inspection it becomes evident just how attractive and gorgeous a flower head this species can produce.  The individual inflorescences bloom for a short time before reflexing and all hang down below the long pedicle that supports the head.  This picture also shows the long calyx teeth (the thin, green 'threads' at the base of each individual flower) which helps distinguish this species.


This particular population was growing in a relatively open area in the under story of a mixed oak woodland with white, red and chinkapin oaks and a scattering of sugar maple along with an herbacious association of yellow pimpernel (Taenidia integerrima), great yellow woodsorrel (Oxalis grandis), and Bosc's Panicgrass (Dichanthelium boscii).  Further up the slope the under story becomes much more thick with vegetation but luckily the immediate area seems to be relatively free of the intensely invasive Asian Amur bush honeysuckle (Lonicera maackii).  Buffalo clover occurs in rocky, open woods and prairies with a strong preference for acidic soils.  Perhaps the acidity of the soil is a distinguishing factor in the color of the resulting flowers?


After photographing and admiring the remarkable buffalo clover for quite some time we decided to do something that I dare say very, very few have ever (and I do mean ever) had the chance of becoming a part of.  Hamilton county, Ohio has the very rare honor of being one of the only counties in the world where one can see both the native buffalo clover (T. reflexum) and the federally endangered running buffalo clover (T. stoloniferum). I can't say without any real assurance but it just may be the only county currently known to have both species with extant populations.  These are Ohio's only two indigenous clovers and both are listed as endangered in our state.


Not long after leaving the buffalo clover my eyes rested upon our other native taxa and equally gorgeous running buffalo clover (T. stoloniferum).  I felt a sense of honor and accomplishment to have been in the presence of two of Ohio's most rare species.  I really would like to find out just how many other counties in the country can lay claim to both these native clovers within their borders.  Perhaps Hamilton is unique in that fact but time will tell and while I am proud of that fact I do hope others can and will eventually share in the joy; the more of these beautiful plants there are, the better off our natural diversity is!