Winter Stroll Through an Old-Growth Wonderland


Everyone catches themselves daydreaming from time to time, myself being as guilty as the next of this common means of killing time.  It's an easy and fast way to travel away from your boring work cubical or class lecture and immerse yourself in a far away world, lost in its infinite possibilities.  For me it's the constant wonder of what Ohio's pre-settlement landscape looked like.  The seemingly endless tracts of primeval forest, the pristine tall grass prairies, fen and sedge meadows, bogs, swamps etc.  All cut, drained and plowed for agriculture and the never ending struggle to survive for the earliest settlers.  When the first white men stepped foot inside our borders in the early 1700's Ohio was well over 90% forested.  Over the next two centuries over 40,000 square miles of forest were cut and Ohio's forests dwindled to only around 15% by 1900.  Today Ohio is back to 33-36% forested with a large majority being in the southern and southeastern sections however it is all second growth and not representational of our ancestors forests.  While debatable, it's highly likely that no true "virgin" forest is left in our state.  Virgin forest is a highly open-ended term but my definition has always been forest that has never been logged in any way or been used for livestock grazing since before pre-settlement times.  The Native Americans had a large influence on the land even before the white settlers came here but obviously not nearly of the same magnitude.  However there are still some small, tiny pockets of forest left that can begin to give us a small idea of what primeval Ohio was like. 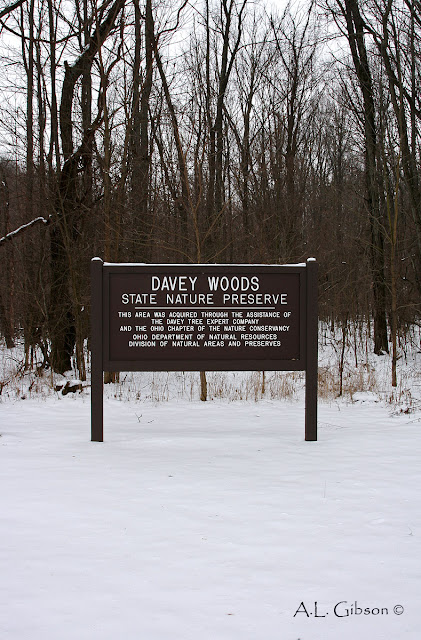 Davey Woods nature preserve in Champaign County near Urbana is one of the finest old-growth forests left in this area of the state.  It is named in honor of the Davey Tree Company, who in 1989 with the help of the Ohio chapter of the Nature Conservancy, purchased the 103 acres of woods to forever be preserved and protected for future generations enjoyment.  The prime attraction is the majestic and stately old-growth trees that tower like skyscrapers into the canopy as well as the Spring display of wildflowers.  Any time of the year supplies you with a long list of amazing features at Davey Woods but it's the winter that really draws me to it.  With no leaves in the canopy to block the view one can really appreciate the true height and size of the resident trees.  It may be weird to say but I love being in Ohio and getting the kink in my neck from looking up that I normally only receive from my time spent in the ancient forests of the Pacific Northwest!  So let's take an inside look at some of the timeworn monsters of Davey Woods.

Reminder!  Please click the photographs to see them in high resolution for better viewing!

The preserve sits on the tailing end of the geologically important Bellefontaine Outlier.  Ancient layers of Devonian-age Columbus Limestone and Ohio Shale have resisted millenia of erosion while the surrounding layers of Silurian rock have slowly eroded away to leave the more resilient rock to form the abrupt hilliness of the area.  The extent of the old-growth area resides in the protective valley and adjoining slopes of the Nettle Creek valley.  Now only a small stream that runs through the forest, Nettle Creek was once much larger as a source of glacial runoff during the Wisconsinan glacial period.  The above picture is the blogger's father walking across Nettle Creek onto the higher slopes of the forest.  The picture to the right (that will never do true justice, as will none of the photos in this blog) shows a large stand of Tuliptrees (Liriodendron tulipifera) across the creek that are all over 100 feet tall and 3-4 feet in diameter, very impressive for today's standards!

The bottoms and lower slopes of the valley are dominated by Tuliptrees (L. tulipifera), American Beech (Fagus grandifolia), Sugar Maple (Acer saccharum) and Red Oak (Quercus rubra) with some American Basswood (Tilia americana) and Green Ash (Fraxinus pennsylvanica) mixed in.  The tree above is the preserve's largest Red Oak on display.  Consulting measurements taken by arborists from the Eastern Native Tree Society on the trees of Davey Woods this tree measures a whopping 4.5 feet in diameter and nearly 130' high!  As with many of the photo's seen in this post, the blogger would like to thank his father for accompanying him on this hike and being a good sport about posing with these magnificent trees so the reader can get a grasp on the size.

Sprinkled throughout the preserve are some of the largest and most beautiful specimens of Wild Black Cherry (Prunus serotina) left in Ohio.  You just don't see P. serotina trees like this anymore and in fact I'm pretty astonished these have survived the ax and chainsaw to attain such a size.  Black Cherry is one of and commonly is THE most prized and expensive hardwood native to eastern North America along with Black Walnut (Juglans nigra).  Tall, straight, forest grown trees such as the one above (125' tall with a D.B.H [diameter at breast height] of 2') with no knots or low limbs would make any logger drool like a dog at dinner time.  I'm no certified forester but I know trees like this can fetch a price tag of well over $10,000.  For just ONE tree too!  The one above is one of about a dozen or so that grace this preserve and show off a great rarity of our time.  Just about all the Black Cherry's like this met their sawmill fate decades ago.

The Tuliptrees are the true champions of Davey Woods without much argument.  Dozens and dozens break the 100' mark and range from 3-4.5' in diameter.  Tuliptrees are known as an early-successional species, usually being one of the first trees to come back when a forest regenerates and die out as the forest matures to the climax stages of Oak/Hickory and Beech/Maple.  However under the right circumstances these fast growers can stick around in their high canopy homes and live up to 200-250 years old.  The Davey Woods Tuliptrees are believed to have sprouted around the time of the American Civil War which puts them in the 150ish year range which has given Nature plenty of time to show what she can do.  The one featured above is just over 4' in diameter and scrapes Heaven at nearly 140' tall!  Early settlers and pioneers wrote of finding Tuliptrees in the primeval forest 7-8 feet in diameter and over 200' tall...unbelievable by today's standards.  The champions of today can be found in the virgin forest of the Great Smokey Mountains National Park.


As you move onto the higher slopes and ridge tops of the preserve the Oak (Quercus) and Hickory (Carya) species start to dominate.  White Oak (Q. alba), Chinquapin Oak (Q. muehlenbergii), Shagbark Hickory  (C. ovata) and Bitternut Hickory (C. cordiformis) with an association of White Ash (Fraxinus americana) and American and Red Elm (Ulmus americana, U. rubra) make up the canopy.  The picture on the left above is of an exceptionally large Chinquapin Oak that measures over 110' tall and 4.5 feet in diameter.  The Chinquapin Oak has some of the sweetest tasting acorns in the Quercus genus and are prized by wildlife.  Many of the Oaks and Hickories showed strong signs of animals scratching and digging around the bases in search of these tasty morsels.  On the right is one of the largest Red Elms (U. rubra) I have come across.  Unfortunately I discovered when I last visited over the summer that this Elm did not leaf out and is now dead.  Whether or not Dutch Elm disease claimed another victim is yet to be decided as there are several other large American and Red Elm in the vicinity that are healthy and alive.  While Dutch Elm disease largely affects American Elm the most, its close relative Red Elm is not immune to the onslaught of this terrible disease.


Walking down into the valley the trail leads you along Nettle Creek and into an area with some of my favorite trees found on the preserve.  Looking up and seeing the canopy consistently over 100' above your head is something I wish I could get used to seeing in more places than just this 103 acre preserve.  While beggars cannot be choosers it is my dream to live long enough to see more of Ohio's maturing second growth forest to be allowed to reach such lofty heights as Davey Woods.  Hopefully mankind will have the patience necessary to allow such an amazing aspect to our world to return for myself, my children and all those after me to enjoy and respect.

The tree above is probably the most perfectly formed and aesthetically pleasing to be found in the preserve, least to myself.  This Green Ash (F. pennsylvanica) along the banks of the creek soars into the canopy as straight and majestically as any tree I've ever seen.  While only 3 feet in diameter the top of its crown rests at a lofty 130' above my head!  If the mythical Paul Bunyan ever needed a mammoth arrow for his equally mammoth bow, this tree's trunk would fit the bill for sure!  Below is a panoramic shot of the tree in its entirety; from base of the stump to the highest twig so you can see what I'm talking about.  (I HIGHLY recommend clicking on this and the other panoramic photo's to see them in a larger, more detailed manner).

For my devotees who have read this far, and I sincerely thank you for doing so, I will leave you with a few more panoramic shots of these voluminous trees to enjoy.  Hopefully this post has inspired you to get out and see this wonderful nature preserve for yourself.  You can get detailed directions by clicking here.