You just never know what your day has in store when you walk out that front door in the morning.  I feel quite fortunate to have experienced and traveled as much as I have in my relatively short time on this planet and I certainly hope to continue that trend well into my future.  That being said, your blogger will have a damned hard time to ever surpass the incredibly luck-fueled and chance spectacle that unfolded along a forested road in Shawnee state forest yesterday afternoon.

The morning found myself and good friend, Michael Whittemore (Flora and Fauna of Appalachia) meeting up for a day spent in the botanical paradises of Scioto and Adams county to see what summer bloomers we could uncover along the forest roadsides of Shawnee and the limestone prairies/glades of the Edge of Appalachia.  It's always a pleasure to get out with someone as passionate about the outdoors as Mike, and luck never seems to be too far behind when we get together...

The preliminary part of our day was spent slowly cruising the forest roads of Shawnee state forest and pulling over every so often for one wildflower species or another.  No sooner had we finished up some camera time with the dainty green adder's mouth orchid (Malaxis unifolia) when I heard Mike beep his horn behind me, signaling to pull off.  I knew it had to be something good to qualify for such a sudden stop. 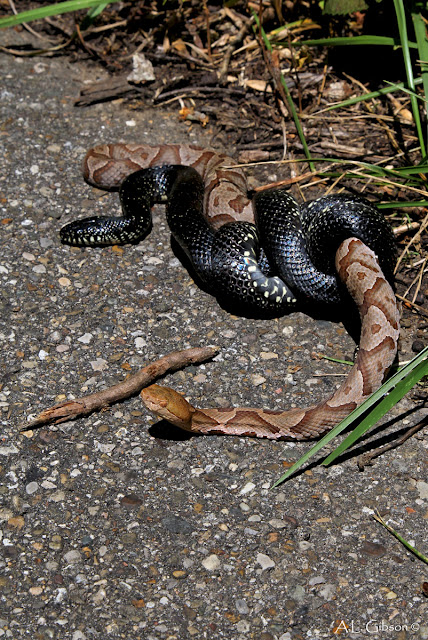 Mike's eyes served him well as that something turned out to be a once-in-a-lifetime event!  Along the side of the road were two snakes entangled in a duel for the ages.  Immediately recognizable was the brown and tan northern copperhead (Agkistrodon contortrix mokeson), one of only three venomous snakes in Ohio.  The black serpent we originally thought was a eastern black rat snake but would later come to discover was actually the uncommon and fascinating eastern black kingsnake (Lampropeltis getula nigra).  It only occurs in a handful of extreme southern Ohio counties and is a species of concern within the state; which only makes this chance discovery all the more unbelievable. 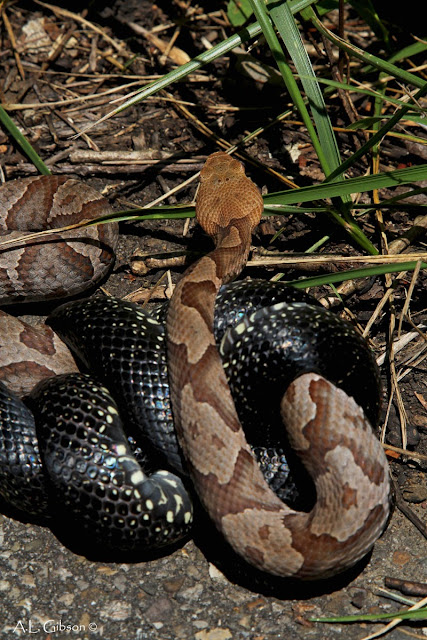 The kingsnake, being a constrictor had the copperhead in its vice-like grip but both snakes seemed to be keeping their heads at a distance, perhaps unsure of how to proceed or waiting for their aggressor to make an ill-timed move.  Eventually the copperhead's patience, or perhaps its oxygen supply ran thin and it begin to slither in closer and make repeated attempts to free itself from the kingsnake's death clamp. 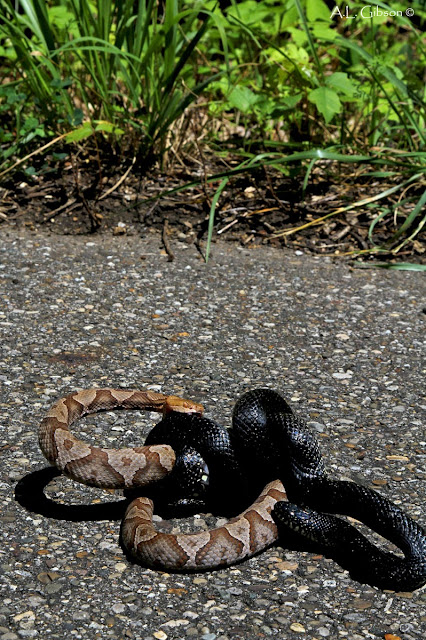 Being a venomous (not poisonous!) snake, we kept our distance from the tussle and for good reason as with lightning quick speed the copperhead sank its fangs into the kingsnake and began to inject its venom!  Mike and I couldn't hardly believe what we were seeing as our camera shutter's sang like a machine gun on full auto. 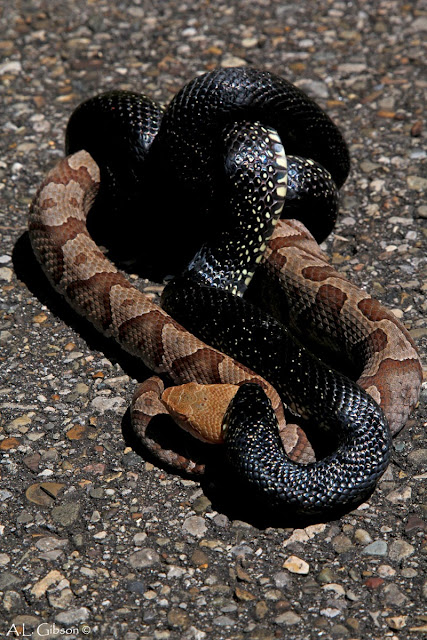 We both thought the kingsnake was a goner after getting such a heavy dose of the copperhead's venom but wouldn't you know the things are immune to its effects?!  Kingsnakes have evolved an incredible ability to withstand and ignore the venom of venomous species such as the copperhead and due to that often times utilize them as prey.  Here all along I was thinking the "black snake" was defending itself or being territorial only to find out the son of a gun was trying to make a meal out of the copperhead! 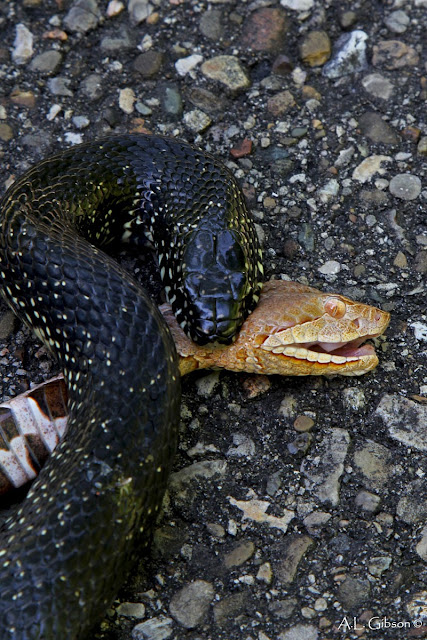 With its venom, albeit ineffective, tapped out and strength continuing to wane, the kingsnake made its move and clapped its jaws around the neck of the copperhead and refused to release no matter how much the copperhead thrashed or writhed.  It's not every day you see something that would almost always get the better odds in a fight be in such a perilous, life-and-death situation! 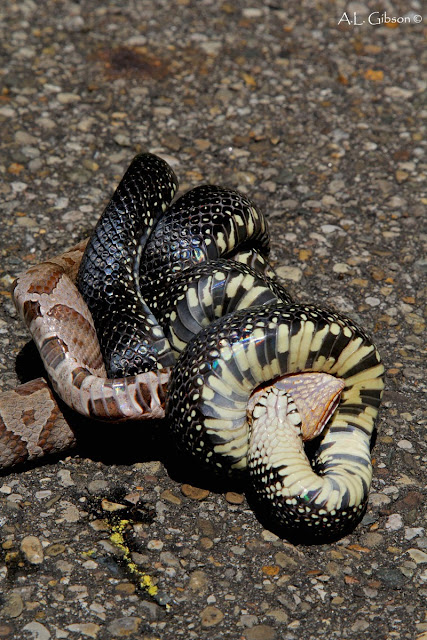 It wasn't long before the battle was all but over as the kingsnake slithered back into the woods and the copperhead a limp and lifeless hunk of flesh left to dry out in the harsh July sun.  Mike and I were fascinated at the callousness of the kingsnake killing just to kill but later hypothesized that it had no desire to take the time or risk of feasting on it while we stood and watched.  Snakes with their mouths full are rarely in any kind of position to defend themselves and I don't blame it for feeling uncomfortable in our presence.

What seemed like a two minute encounter lasted nearly 20 minutes and gave Mike and I more thrills, yells, and jaw-dropped-open moments than we could have ever dreamed of.  I can't imagine ever getting the chance to witness something like this again in person; let alone with two uncommon, awesome species of snake.  Hindsight is always 20/20 and I can't believe neither of us ever thought to film the struggle with our phones or cameras but I think the shock and awe of what was taking place in front of us was too much to allow ourselves to think or do more than click the shutter button on our cameras.  Such a powerful and rare display of the infinitely wondrous world that goes on right under our species' noses on a daily basis.  Life and death, prey and predator.  I suppose most things like this are out of sight, out of mind for a majority of our population but for those that do take the time to immerse themselves in the wild, this stands as testament that you just never know what you may come across out in the field!
Posted by Andrew Lane Gibson at 3:01 AM