Coral in the Woods?

Well, I'm finally back!  I apologize for the lack of attention I have paid to this blog the past couple months but with a heavy college schedule comes projects, assignments and papers and very little free time and energy.  I am going to do my best to publish a new post or two per week but I can't make any solid promises.  So to all my faithful and devoted readers please start checking back in regularly for updates taking you ever deeper into the wonderful natural world Ohio has to offer!

It's a bitterly cold evening in late December and my gaze out the frosted window is met with a wintry scene of snow and a few icicles hanging from the eaves of the roof like stalactites.  Almost instinctively my mind turns from the frigid conditions outside and begins to travel back to warmer days where the bleak and bland grays and browns of the landscape are adorned with the vibrant shades of summer green.  Back to a time when one of my favorite families of vascular plants, Orchidaceae, is showing off its intricate beauty and not imprisoned in its current subterrestrial hibernation.  As my previous posts are sure to point out and no doubt future ones to come, my botanical passion tends to run deepest in our native, wild orchids.  Their complexity, rarity and nigh on impossible beauty combined with the sheer excitement of discovery all add up to be almost unbeatable for someone like me.  Of the 47 species of orchids (46 native, 1 introduced) found in our state I have so far had the pleasure of making the acquaintance of 21.  I have high hopes of adding to this already pleasing number this growing season and look forward to writing future posts devoted to their splendor.
So let's leave this frozen world behind and travel back to the heat and humidity of mid July in Adams County and focus on one of the most weird, stunning and rare plants Ohio has to offer; the Crested Coral-root orchid (Hexalectris spicata).
The Hexalectris genus is made up of seven species of orchid mostly restricted to the arid lands of Texas and neighboring Mexico with only one species escaping to the north and east, that being H. spicata.  Like a number of other southerly distributed plant species, the Crested Coral-root's northern-most range barely makes it into three of Ohio's southern-most counties of Adams, Lawrence and Scioto.  The Edge of Appalachia preserve and nearby Shawnee State Forest during late July-mid August is your best bet of finding this elusive and fickle orchid.  A state threatened species, H. spicata resides in semi-shaded, open mixed Oak woodlands and limestone/Red Cedar glades.  While it is reported to be found in both acidic and alkaline (calcareous) soils it seems to have a preference for areas with a bedrock of limestone that is close to the surface.  In the well-drained, non compacted soils underneath Post Oak (Quercus stellata) and Chinquapin Oak (Q. muehlenbergii) groves in the picture above the Crested Coral-root put on a mighty display this summer.

While many of our native orchids are charming and unique in their own right I personally think H. spicata ranks among the highest and is in its own class.  Standing one to two feet tall, the yellowish-tan, fleshy stem is topped with a raceme of 8-15 flowers each about an inch wide that seem to have been carefully sculpted out of clay.  The honey-brown colored petals and sepals are delicately lined with brown/purple veins but it's the lip that really steals the show.  Set on a whitish-yellow background the most elegant and royal display of purple flows from the column (the main reproductive structure of an orchids flower which is composed of the fused stamens and pistils minus the ovary) and spills out across the lip like ribbons of silk.   While stunningly attractive and certainly different looking it's not just the floral display of this species that makes it so interesting to me.
Like the true Coral-roots of the genus Corallorhiza and a number of other plants/fungi/bacterium, Hexalectris spicata is a saprophyte, meaning it is unable to manufacture its own food and must derive its nutrition needs from other organic matter in the soil.  The underground rhizome (which looks like a piece of coral, hence its common name) is enveloped in mycorrhizal fungi which it forms a vitally important symbiotic relationship with.  The mycorrhizal fungi sends out a network of mycelia (the vegetative thread-like "root" structures of a fungus) throughout the soil and infect the roots of other nearby plants drawing out their nutrients and bringing it back to the orchids rhizome for use.  While all orchids have this symbiotic relationship with the fungi to aid them in their battle for nutrients many develop leaves for an additional source of food through photosynthesis.  However the Crested Coral-root never gets to that point and relies solely on the fungi to supply its nutrients. 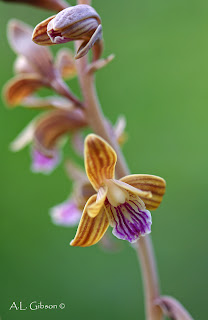 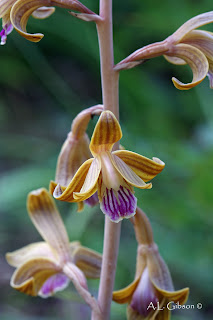 Due to this symbiotic relationship H. spicata has no need to appear above ground other than to flower and produce seeds.   The rhizome will persist for years underground and only send up a flowering stalk when the needed environmental factors and conditions present themselves.  Wet conditions throughout the summer seem to coincide with a strong showing of Crested Coral-root however the inter-relationship of environmental factors and anthesis are still not fully known or understood.  So while one year there may be a profusion of flowering stalks (such as this summer, these guys were blooming all over the Preserve!) the next year may produce very few or in many cases, none at all.  All this adds up in making this orchid a potentially frustrating and very sporadic summer bloomer!
After pollination the flowers shrivel up and fall off the stalk leaving only the ovary to swell with maturing seeds inside.  Once matured, the capsule (dry fruit or seed pod of an orchid) dries and splits open releasing thousands and thousands of absolutely tiny, minute seeds.  If you pay careful attention during a light breeze you can see the capsules emit what appears to be a yellowish 'dust' into the air which are the nearly microscopic seeds being dispersed by the wind.  Orchids seeds do not have an endosperm and rely entirely on the mycorrhizal fungi to establish themselves and survive.  This is what makes almost all wild orchids nearly impossible to transplant, most specifically those that are saprophytic.  It always grinds my gears to hear reports of an orchid population, whether it be a few hundred plants or one individual, being devastated by people digging them up to sell or replant at home.  Not only is it illegal to do so it is also 99.9% of the time a vain effort.  Not even our orchids are safe from humanity's senseless greed and thoughtlessness.  So next time you stumble across an orchid in the wild appreciate it and admirer it with your eyes and not your hands.  Hundreds of years of careful, tedious growth and patience can be ruined in seconds.
Posted by Andrew Lane Gibson at 4:37 AM 4 comments: